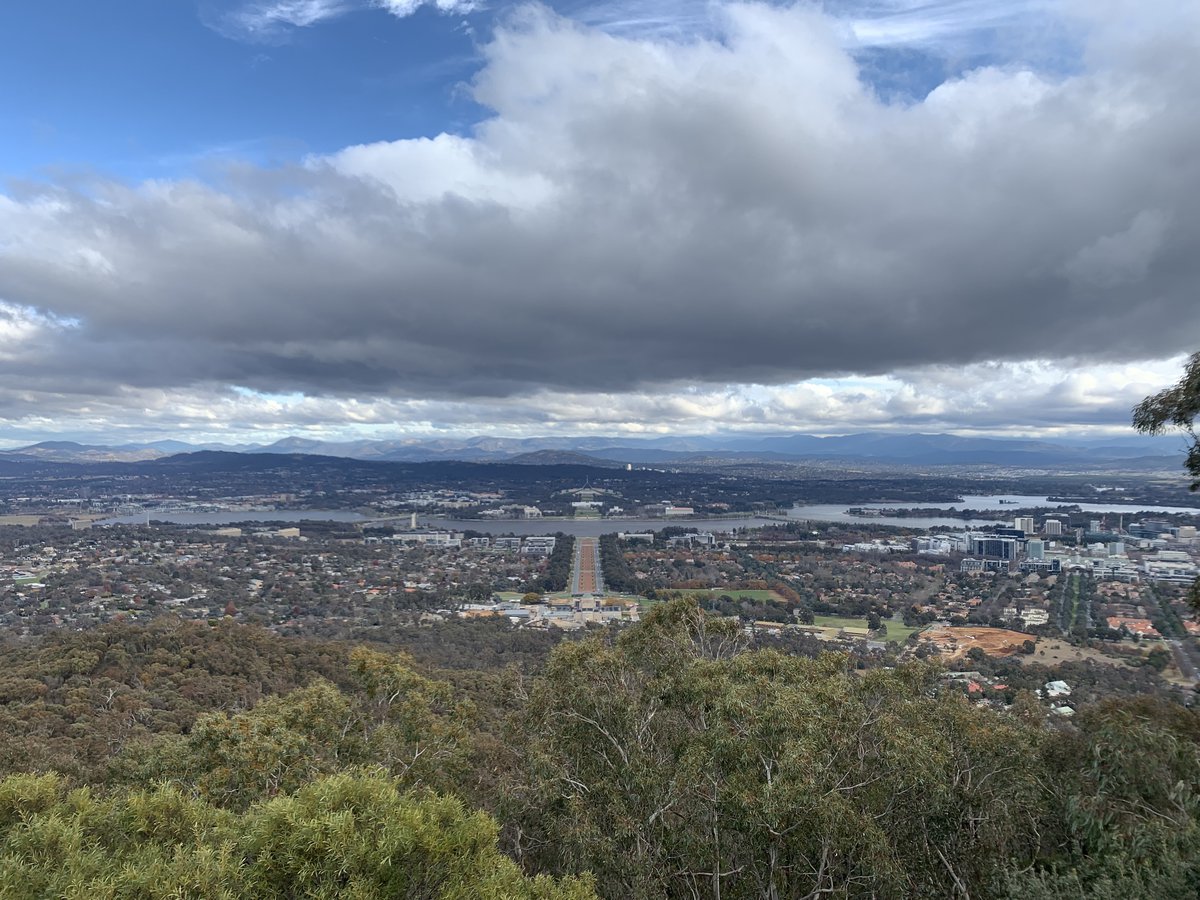 On the last two days of Term 2, our Year 6 classes travelled to Canberra for an educational tour of the Nation's Capital. Students were given the opportunity to participate in a variety of educational programs with a focus on Australia’s history, culture, heritage and democracy.

During their time there, they visited Mt Ainslie, both Old and New Parliament Houses to explore the way our government is run, cast votes during their own preferential election at the Electoral Commission Office and went back in time to visit the ANZAC soldiers at the War Memorial. There was also a special nighttime outing that the students have detailed below:

Our ﬁrst stop in Canberra was the Australian War Memorial. As we walked in there were GIANT photos on the walls of people who served in the wars. In the museum there were lots of ﬁgurines and planes. There was a wax ﬁgure next to a plane that I thought was a real person for a second! In a big room with screens on the walls we watched a video that explained what the war memorial is. After that we walked around and looked at the many paintings, medals and ﬁgurines. My favourite part was seeing the Tomb of the Unknown Soldier. There were amazing mosaics of nurses and soldiers. I also loved the Eternal Flame. We stopped at some of the items on display and our tour guide told us stories and facts about them. The Australian War Memorial was by far my favourite experience in Canberra! Penelope (6B)

On the last two days of Term 2, Year 6 went to Canberra. We did many fun and exciting things, but I personally have some favourites. My first highlight on Thursday, is when we were driving there and back . Many people find this time the worst part of the trip, but I enjoyed it because I got time to talk with the person sitting next to me. Going to the Electoral Education Centre (EEC) is one of my favourite places that we visited. It was nice to learn about our electoral system in such a fun and interactive way. Old Parliament House is another one of my highlights. It was so nice to learn about Canberra’s history and how the parliamentary system worked years ago. Another highlight was going to the Power Kart Raceway. We got to play Jungle Mini Golf with all of our friends and had a lot of fun. On Friday, our last day, we visited Government House and got to learn about the Governor General. He is the most important person in the whole of Australia because he represents the Queen. Fortunately we got to meet him and his wife there. My last highlight of the trip was going to Mt Ainslie. It was a beautiful sight at the top and I was so lucky to have been given the chance to go to Canberra with all my friends. Thank you, Ms Musa and Mrs Oxley for taking us to Canberra! Yves (6G)

My highlight of the trip was definitely the War Memorial. It was the first official place we visited in Canberra! There were 3D artworks/sculptures, different lighting to match the scenes, noises from what you would have heard if you were in the war and real things from the war! We learnt about a few specific people. One guy had gone onto the opponent's side to help save Australia. And it worked! I was most concentrated on the wall of names outside. I was busy examining each one, feeling bad for the names at the top because there were barely any flowers up there, maybe because people couldn't reach. I thought to myself, “If I had brought a lot of money, I would by all the poppies here making sure there was one next to each name”.  Natasha (6B)

Last term our entire grade went to Canberra on an excursion. We went to a lot of fun and exciting places, but here are my favourite ones. The biggest highlight of our time in Canberra was definitely Government House. We arrived there on our bus and we got to sit in the hall while a nice lady talked to us. She told us a bit about the Governor General and his wife. Afterwards, we were given a tour of parts of the house and the gardens, and we got to see the Governor General’s expensive cars. The best part was that we got to meet the Governor General and his wife! Another place I really enjoyed was the War Memorial. We heard some interesting stories about World War ll, including one about a horse. One thing we saw was the boat that carried the Australian and New Zealand Army Corps to Gallipoli during the war. We also got to see the eternal flame, the Tomb of the Unknown Soldier and the names of the Australian soldiers who served in the war. Going to both of these places was incredibly fun. I hope I can go to Canberra again! Junran (6G)

There were a lot of things to love about Canberra. My favourite part was the bus rides, going from place to place looking at all of the sites to see, along with the conversations you have with your seatmates that goes on and on. Although it was a long ride, it was worth it. First stop was the War Memorial followed by New Parliament House, then the Art Gallery and Old Parliament House. During the ride, the bus driver was talking to us on the megaphone. After we had dinner we got on the bus and went to the Power Kart Raceway to play glow in the dark Jungle Mini Golf. And there were more adventures to come the next day! By far it was the best excursion ever and I am 100% grateful that I went! Ava (6B)

One of my favourite things about Canberra was going on the bus. It was really fun playing card games with my friends and looking at the views. When we got to Canberra, I loved it when we went to the AEC electoral education centre. It was really cool seeing the holograms and playing the games. I also really enjoyed going to the rose garden/park. It was such a beautiful place and I especially liked pretending to be very posh and walking around the garden. Playing the game “What I brought to the beach” was really one of my favourite things we did. It was so much fun trying to figure out the rule, and then when you figured it out, waiting for other people to figure it out. Ibis Styles Canberra was a really nice hotel, I liked having your own keycard so only you and your roommate could get in, and I also liked having downtime to just relax and play card games. On the second day of our Canberra trip, one of the best parts was going to Government House and meeting His Excellency, the Honourable General David Hurley AC DSC and Mrs Hurley. It was really interesting going to the Australian War Memorial. I liked seeing all of the items and hearing all the different war stories. I also really liked going to the Mt Ainslie Lookout, it was such a great view. Then we went to McDonalds which was really nice. Although it was sad, I did like it when we went home on the bus because we had so much fun in Canberra. Olivia (6G)

Waking up when it’s still dark out. Aiming to reach school before the bus leaves. Trying to entertain ourselves on a 3+ hour bus ride. These things were all tough, but it was worth it. My favourite stop of all in Canberra was (drum roll please…) the Night-time Jungle Mini Golf! Imagine playing putt-putt with your friends, while EVERYTHING was glowing! Balls, clubs, jackets, shoes, and sometimes even our eyes were lighting up in the dark! We played in teams of 4 or 5, sharing 2-3 golf clubs among ourselves, taking it in turns to hit the ball into the hole. Not only were there normal holes, but ones with hills, tunnels, and more! One of my most favorite levels was hole number 4, which had a loop-the-loop in it!  Jungle Mini Golf in the Power Kart Raceway is an exceptionally fun, bright, entertaining, and lively activity to do, even if you don’t know how to play golf! If you ever drop by near it, I would deﬁnitely recommend going! Shloka (6B)

The first stop was The War Memorial, it was a blast! We had a tour guide named Jenny and she took us around the place and what we saw was unbelievable. When we came to the WW2 section, she took us to a 3D model of what the State was like in 1939. There was mud everywhere and there was a big metal box called The Pill Box. Later in the tour she took us outside. We saw a big shallow pool and in the middle was The Eternal Flame. Jenny then took us to the wall of soldiers and then the temple of the unknown soldiers who died for us during the war. After dinner all of us went to our dorms to change into our sports uniforms. All of us were so excited to go. Everyone screamed with excitement in the hallways. When we had to leave to get to the bus everyone was jumping up and down. When we got there we had to wait ages to go in. But when we got in my shoes glowed because of the type of lighting they had in the room. I had a good time and I got a hole in one. I hope I can go there again. Canberra was an amazing time! Alicia (6G) 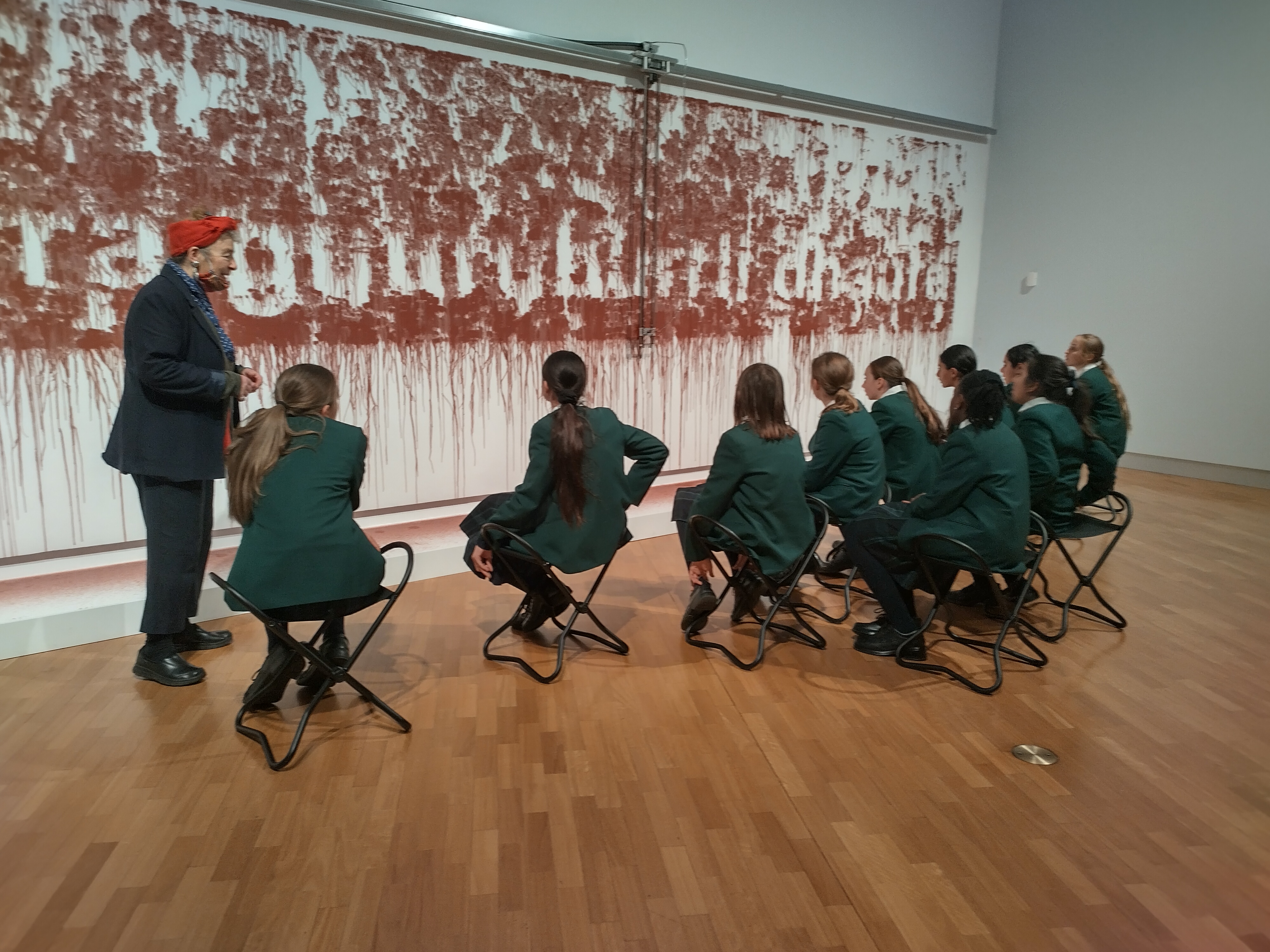 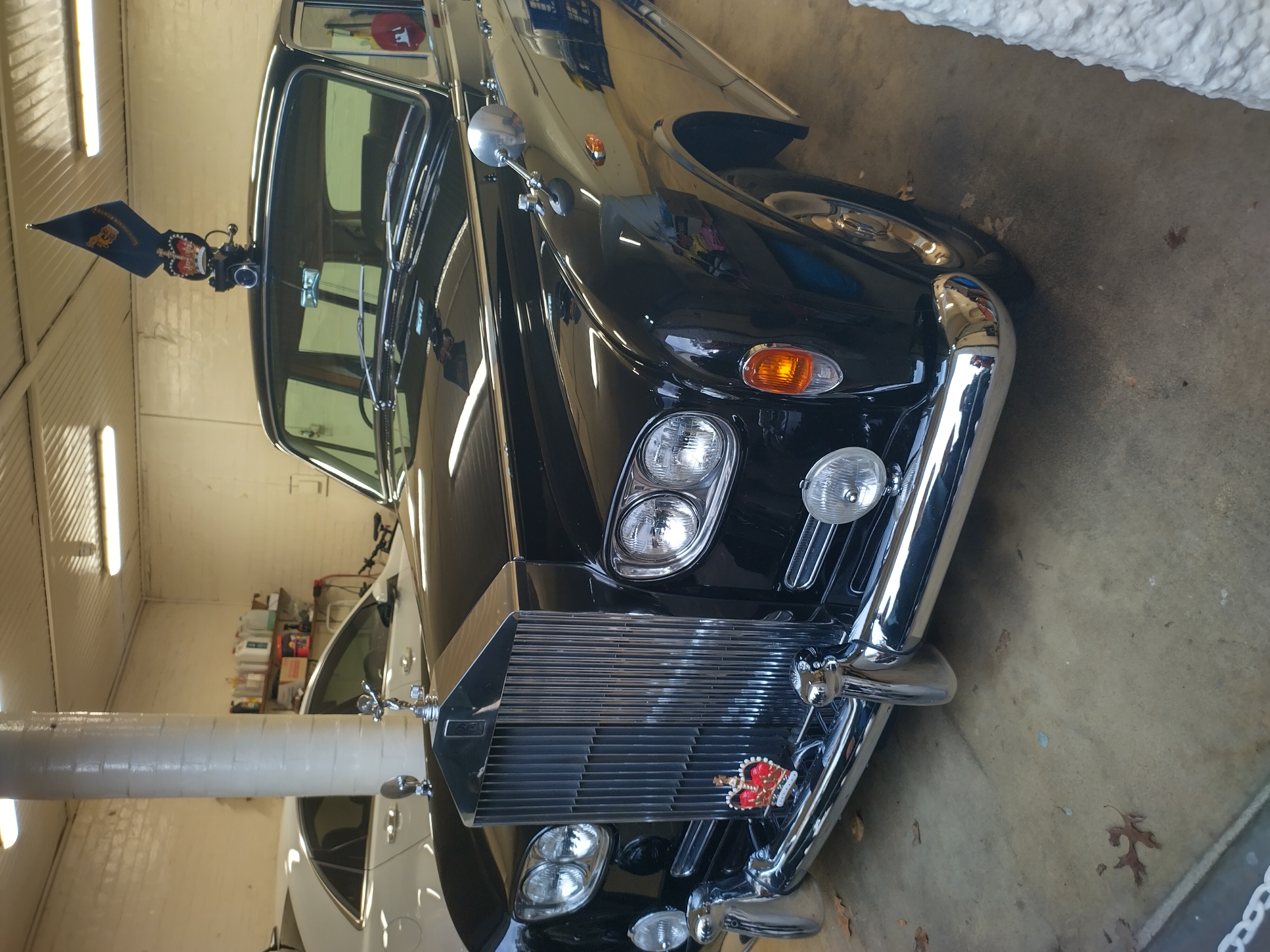 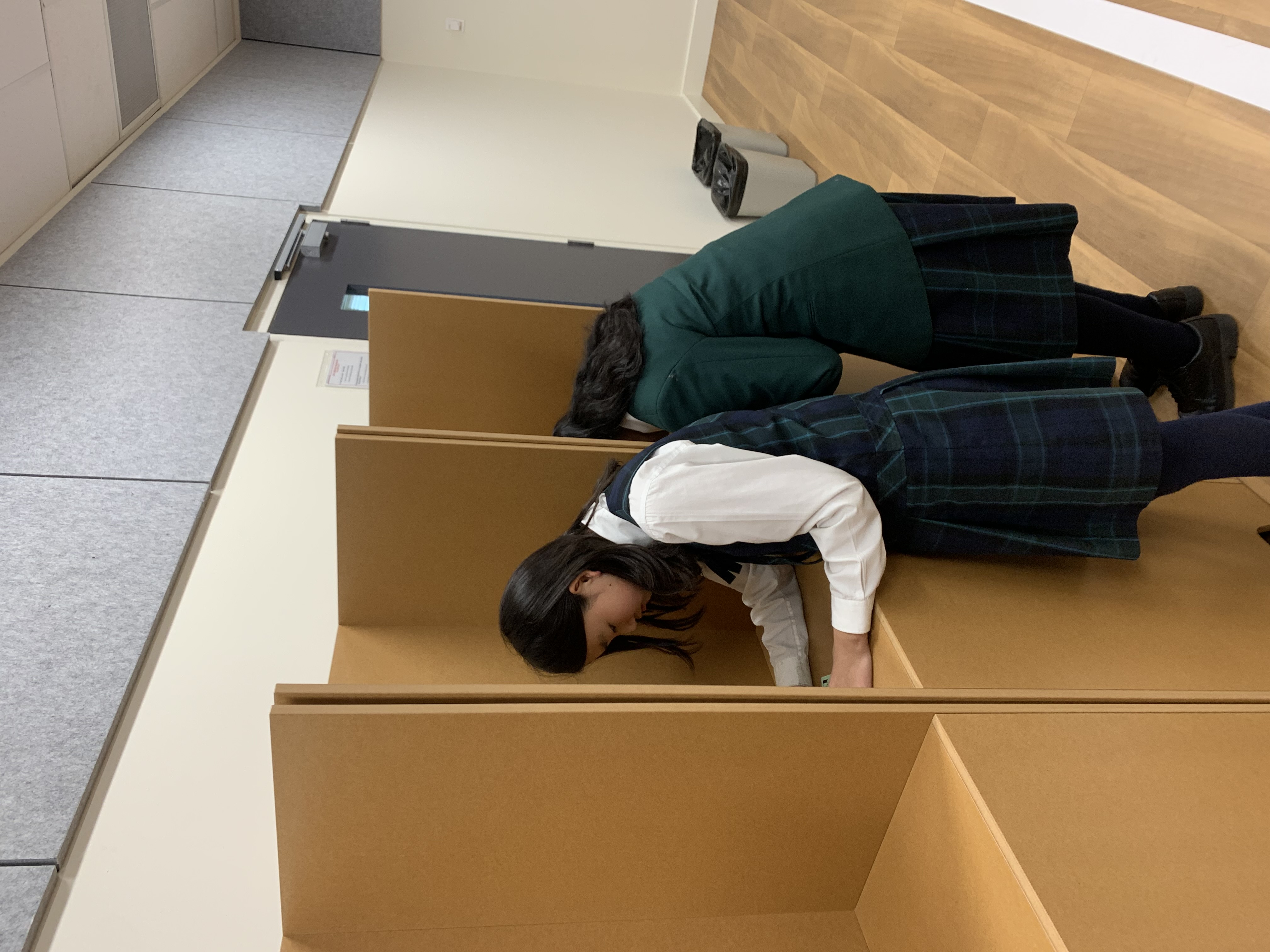 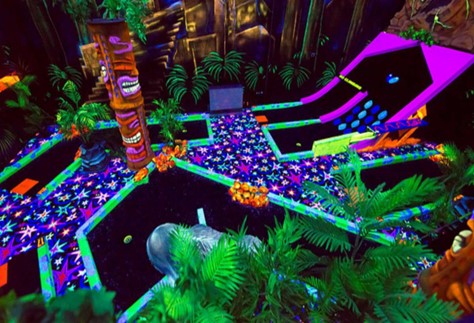 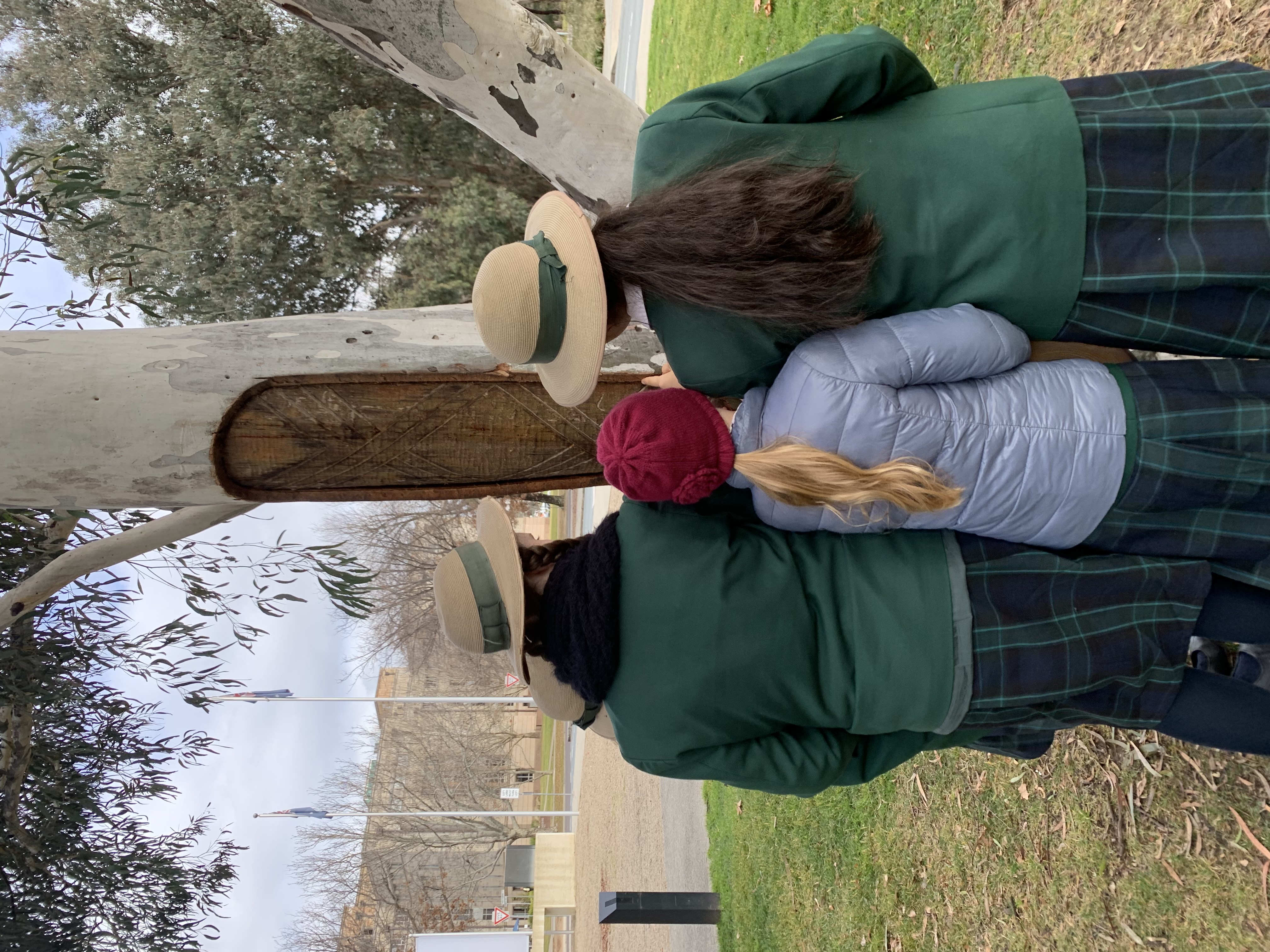 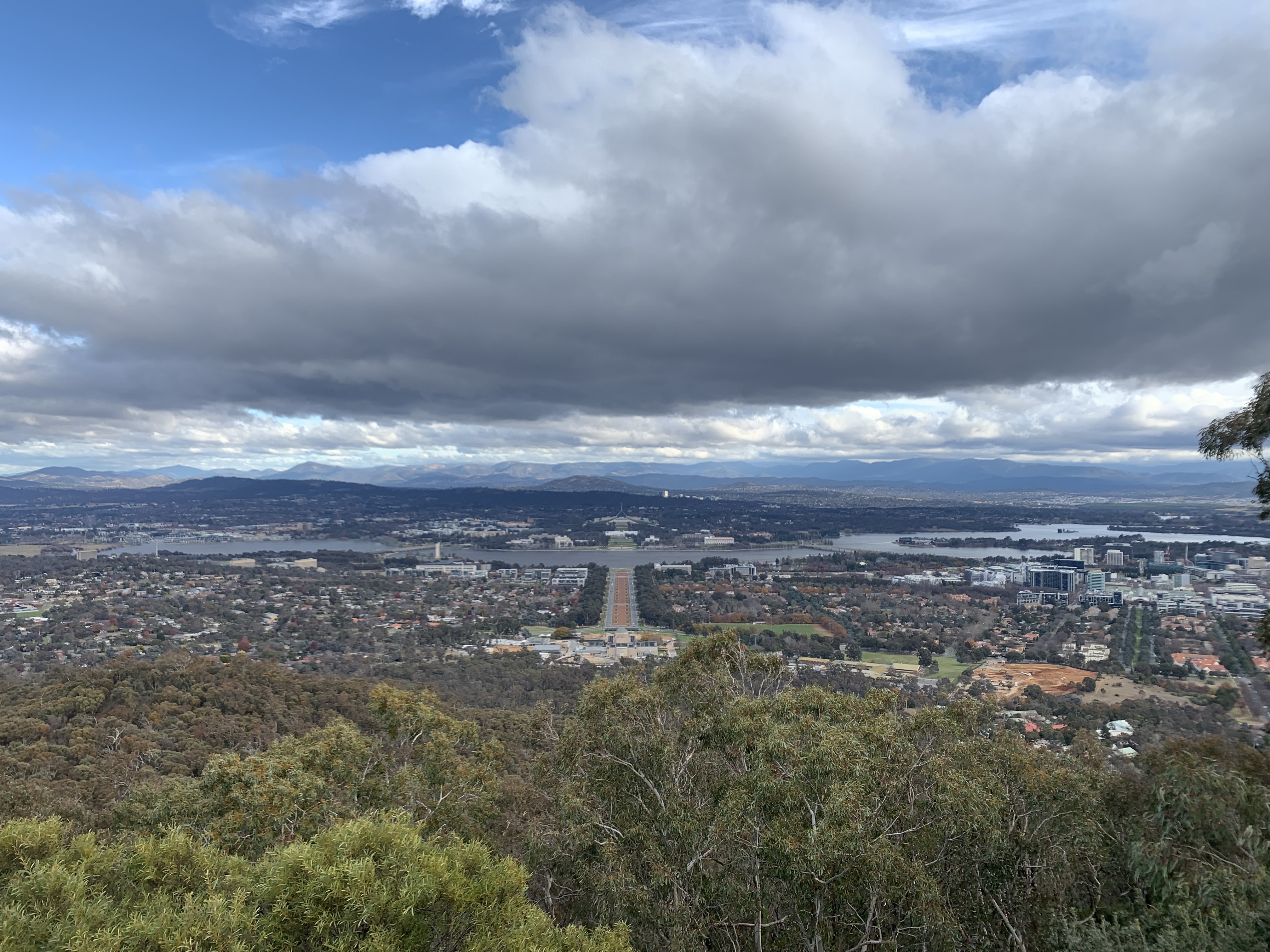