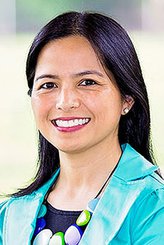 Alexandre Havard’s second presentation on Magnanimity and Humility: Traits of a Good Leader was a great addition to the first presentation where he outlined the temperament types and what virtues people with different temperaments can focus on to develop their character. He made an interesting point when he said that leaders are not born but cultivated. There may be people who are natural managers, but this does not mean that they are good leaders. Good leadership is rooted in the heart and can be developed by everyone. By helping our children grow in magnanimity and humility we can encourage them to be real leaders, who understand their strengths and weaknesses and are not afraid to work on them and use them for good. We enable them to become a version of themselves that has the capacity and willingness to serve others and improve society. This is such an important task and will pay big dividends now and in the future. I encourage you to keep going back to the valuable information from Havard’s sessions and to reflect on how you can put in into practice in your own families.

The Year 7 Mother Daughter Day was a great time for mothers and daughters to bond and discuss the topics of friendship and self-worth, both valuable topics to explore particularly at this age. Thank you to all those involved with organising the day, and to Rebecca Aoun and Asma Johansson for preparing and leading the art activity in the afternoon. We all enjoyed painting and tapping into our creative side.

Congratulations to Vielle Marquez who was selected for the NSW Acrobatics Gymnastics State Team for Level 6 and competed at the Australian Championships last weekend. This is a wonderful achievement and recognises the many hours of training that go into performing at such a high level.

Many of you heard the sad news that Trifon Triantopoulos, brother of Nektaria (Yr 10 ) and Irene (Yr 7) died recently. We continue to pray for him and his family during this difficult time. Please also remember Mr Paul Miller (grandfather of Rose Lynch, Yr 9) who passed away last week. Paul Miller was a man of faith, who generously gave of his time and talents to help the schools, serving as Chairman of the Board of Pared during its early years.

Years 7 to 10 will be commencing their Half Yearly Exams next Thursday. We wish them well with their final preparations and good luck for their exams. 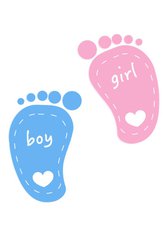 ©      Ana & Martin Bezuidenhout on the birth of Maria, sister to Isabella (KG), 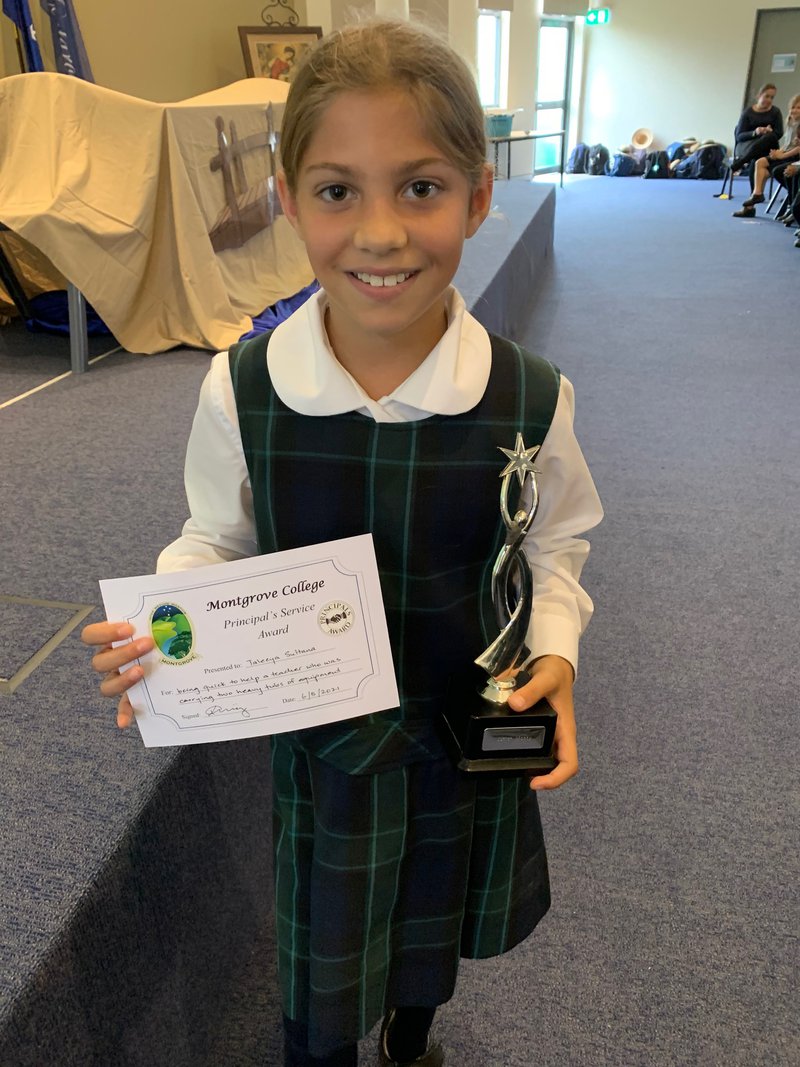 The Monty went to Taleeya Sultana (5B), for being quick to help a teacher who was carrying two heavy tubs of equipment.

A big thank you to the families of KB and 4B for the beautiful meals you prepared for us after the birth of baby Reuben Joseph and to the class parents for coordinating. Your generosity and prayers are very much appreciated!

Students should not attend school if they are unwell, even with mild symptoms of COVID-19. Any person with any COVID-19 symptoms will be sent home and should not return until they have received a negative test result and are symptom-free. In
circumstances where children have other medical reasons for recurrent symptoms a letter from their GP is sufficient to negate the requirement for a negative test.

Anyone who is unwell with COVID-19 symptoms are strongly encouraged to get tested and self-isolate until a negative result is received. A copy of the negative COVID-19 test results must be forwarded to admin@montgrove.nsw.edu.au before your child returns to school.

We thank you for your cooperation.

From the Primary School 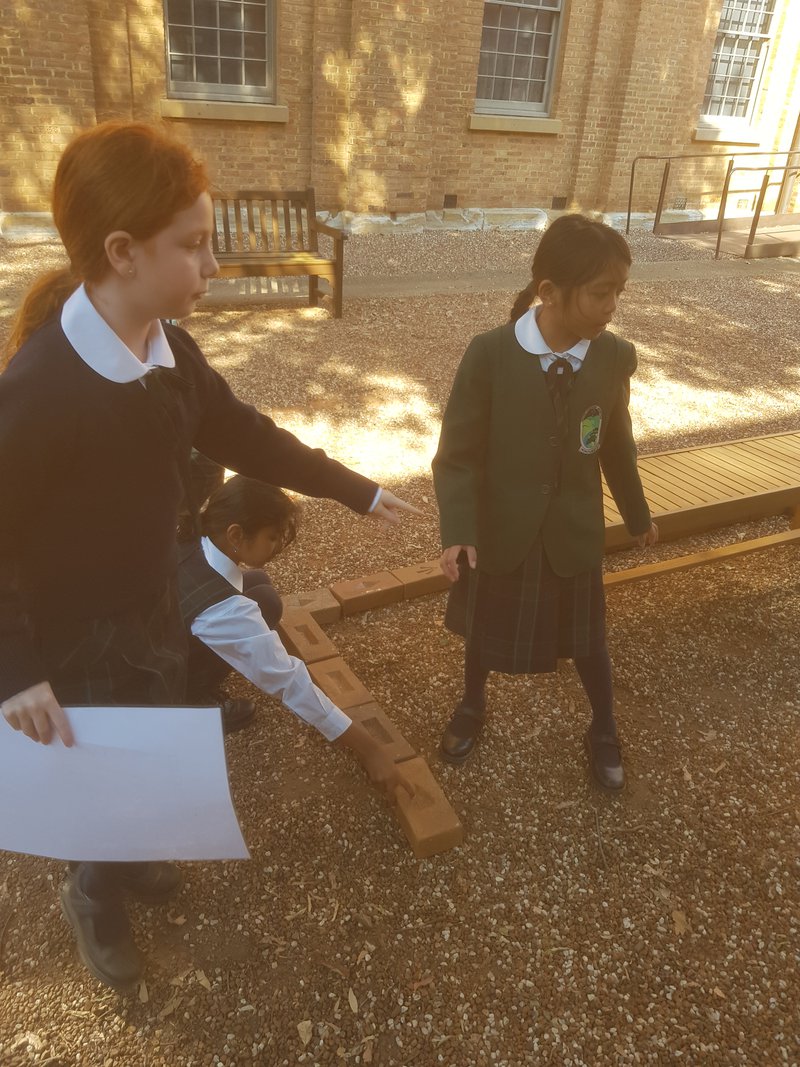 Whilst this recount takes you back to Tuesday, 27th April: Year 4, on that day, was taken back to the late 1700s at Hyde Park Barracks. The morning fog was charged with excitement as the girls waited for what may as well have been centuries for everyone to arrive — including the bus. Though the ride into the city was long, it felt far from it; there were too many conversations to be had, songs to be sung, sights to be seen (including water views and cityscapes, as well as the ANZAC and Harbour Bridges!), books to be read, games to be played … the list was endless! (and thank goodness no one ended up sick on the bus!).

Once we arrived at the barracks, we had a quick morning tea and toilet break — the toilets were AWESOME! They had an automatic sliding door at the entrance, fancy sink and everything! We were then split into three groups: either with Miss Pospischil, Mrs Dominici and Mrs Japon, or Miss Reyes and Mrs Sagun, plus the museum staff. We were able to analyse some artefacts, such as paintings, maps, love tokens, leg irons (they were heavy!), clothing, various tools and … bones! The stand out had to be the whole rat skeleton! The rats may have been unwanted by the convicts back in the day but today, they’re the historians’ friends. Their nests were like mini museums made up of little bits of genuine convict clothing and other found objects.

We were also able to lie down on replica hammocks. We were able to fit into them just fine — in fact, some of us were quite comfy — but I could imagine how cramped, stinky and freezing in the winter/hot and sweaty in the summer it was for the tall, built male convicts, and they only cleaned up once a week! Some of us also role-played being convict overseers. They pretended to boss us around as we laid some fake bricks. As a side fact, did you know that convicts put tally marks on their bricks? They made 1 000 bricks everyday and at every 100 bricks, they stuck their fingers into the brick leaving an indent in order to keep count (one finger equaled 100 bricks, so five fingers marked 500 bricks). These marks weren't the only ones on the bricks. When they were left out to dry, sometimes animals walked on them! We saw a paw print in one of the bricks. We wondered what animal could have caused it, hmmm …

After we finished at the barracks, we walked to Hyde Park for lunch. There were so many ibises — they were fun to chase — and there was a HUGE fountain! The teachers brought a picnic rug to sit on while eating (no fair!). Once we finished having lunch, we walked to Saint Mary’s Cathedral to pray the rosary. The cathedral was SOOO BEAUTIFUL!

In the end, it was time to start heading back to school. We had to change locations in order to get back onto the bus. The return journey was a lot quicker — and quieter! Quite a few girls fell asleep! What an adventure!

From the Secondary School 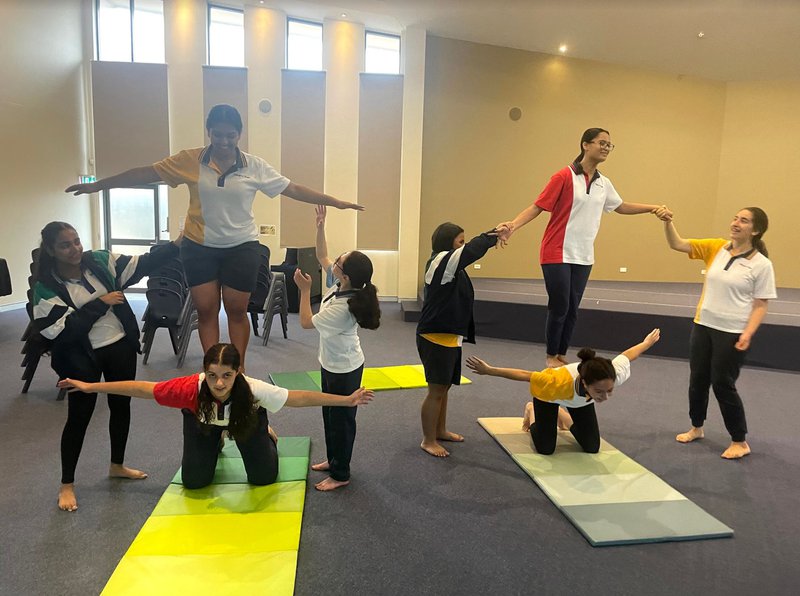 On Tuesday 4th May, Mrs Ryan organised an incursion for the Year 11 Drama class. This incursion went for 2 hours but since we had so much fun, the time went so fast! Our instructor, Danielle showed us some Physical Drama acrobatic shapes and tricks we can apply in our group performances. For example, we learned how to do 'the caterpillar', where we created a caterpillar shape with our bodies. Another movement also involved everyone as we climbed on top of each other like a pyramid. Danielle taught us how to open our minds and be more creative with using our bodies in any group performance.

We as a class gained lots of knowledge and trust in each other and enjoyed every minute. We appreciate Mrs Ryan for preparing the lovely incursion. We had so much fun!

The school needs volunteers for the Chapel for 2021.  If you have a few hours to spare to help with flowers or cleaning of the Chapel can you please contact Raelene on raelene.pirotta@montgrove.nsw.edu.au 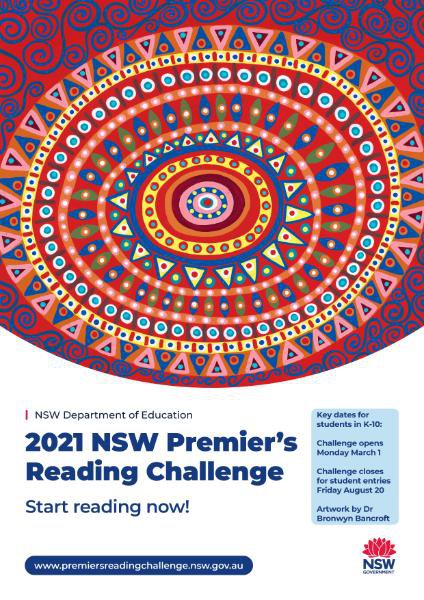 We have had 108 students complete the challenge so far this year!!! It is great to see so many students reading!  What an amazing effort!!

The Premier's Reading Challenge (PRC) is available for all students from Kindergarten to Year 9.

Congratulations to the following students who have completed the 2021 challenge: 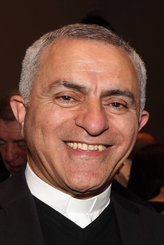 "That wise Greek, Diogenes, lived as free from attachment to material things as it was possible. For a time he dwelt in a tub, because that was shelter enough for him. One day he visited a fair where hundreds of different articles were on display and sale. Diogenes afterward remarked: “What a number of things there are that Diogenes can do without!”

Contentment is measured partly by what we can do without, and not so much by the number of things we have.

So, here is one of the secrets of true cheerfulness, expressed very clearly in one of the points from St Josemaria's book, "The Way": "Do not forget it: he has most who needs least. Do not create needs for yourself."

How is that Easter Joy going? Pope St Paul VI reminded us that Christian joy is a participation in the joy of the Risen Lord.  It also comes as a reward for trying to practise it.

Here is another one of those “training-school” blessings we can ask of St Joseph.

Confessions will be available at Montgrove College for Term 2 2021 as follows:

Please pray for our sick and injured family and friends:

Please also remember those who have passed away:

If you would like to add any intentions to the Prayer Board, please send them to melanie.merriman@montgrove.nsw.edu.au. Please also let Melanie know when your intentions can be removed.

The fitting room is located in the Montgrove Cottage and will be available by appointment during the normal school term on:

If you wish your child to:

Please complete the “Uniform Shop Permission Form” on Skoolbag to advise Montgrove Office that you give permission for this to happen.   The form is located under EFORMS on the Skoolbag app, in the same place as the Absentee Form.

Kindly note that if this permission form is not completed, your child will not be able to attend the Uniform Shop during school hours unless accompanied

All orders will be picked and packed from the Midford warehouse and delivered to the school free of charge once a week. Home deliveries are also available with a $15 delivery fee.

Any order placed by COB Thursday will be ready for collection at the Uniform Fitting Room from the following Monday. All packages will be sealed and clearly marked with the student’s name and class to ensure no confusion.

A Presentation by Dr Sam Day on talking to your child about their changing bodies, love, and sexuality. It will then be followed by afternoon tea, discussion and experience sharing

We then plan to walk to Emu Hall for afternoon tea. 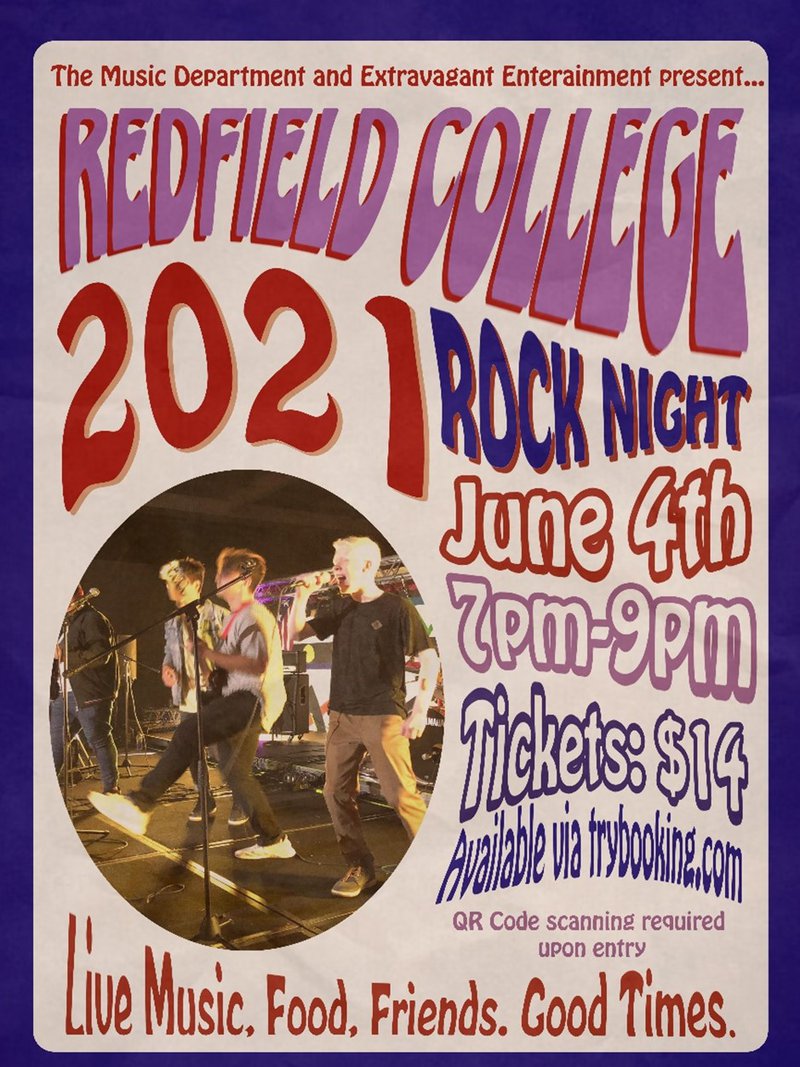 Live music is gradually coming back in NSW....that means, Rock Night is back at Redfield!

The Redfield Music Department and Extravagant Entertainment are thrilled to be hosting Rock Night once again this year.

Join us at the Redfield COLA at 7pm-9pm on Friday 4th June 2021 for our annual event, showcasing the amazing musical talent that Redfield have to offer.

Students from Years 6-12 may attend.  Parents are also most welcome and encouraged to attend.

Tickets are only available to be purchased online, no tickets will be sold on the door.

QR Code scanning will be required when entering the premise.   We hope to see as many of you there as possible.

This event is to be attended by STUDENTS AND PARENTS OF PARED SCHOOLS ONLY.

Link to purchase tickets can be found here: https://www.trybooking.com/BQSVL